The 2019/2020 Junior Mayor is Tejano Taylor a 6th form student at the Herbert Morrison Technical High School in the city.

Taylor was crowned at on Thursday October 17, 2019 during a hard-fought competition held at the Montego Bay Cultural Centre and takes over from the 2018-2019 Junior Mayor, Sandrine Morris.

The 2019/2020 Junior Mayor competition was contested by twenty students from High Schools across the parish and the Montego Bay Community College. Supporting Junior Mayor Taylor this year will be Depity Junior Mayor Arianna Buchanan of the Montego Bay High School, was awarded second place as Junior Deputy Mayor while Jaheim Stennett of Cornwall College will act in the capacity of Chief Executive Officer. The other contestants will serve at Junior Councillors and coopted members of the Junior Council. 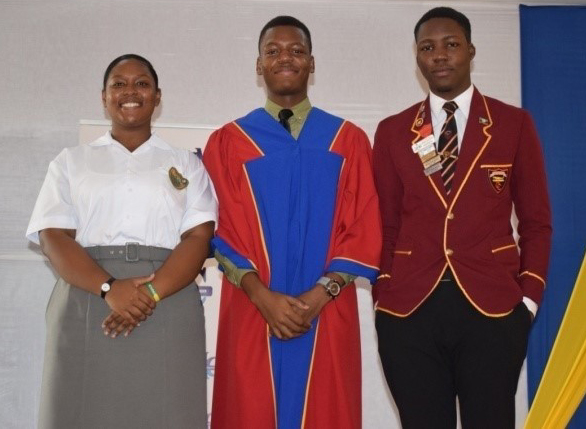 In reflecting on his new role as the Junior Mayor of Montego Bay, Taylor said he plans to lead from the front.

“It has always been my dream to occupy a position such as this and having achieved that goal, I will ensure to work with my team in stamping our prints on this city. Jamaica overall needs creative young leaders and I think that in this 2019/2020 Junior Council, we have some of the brightest minds and we will surely make an impression on our city”, Taylor said.

He added that “I know we will be getting great support from the senior Councillors, led by Mayor Homer Davis and it is our aim to maximize on that support to build Montego Bay as a city and St. James as a parish. I am very confident that we will make a great impression during this 2019/2020 administration of the St. James Junior Council”.

Meanwhile, Chief Executive Officer of the St James Municipal Corporation, Gerald Lee, in his official welcome, emphasized the importance of students’ participation in local governance and initiatives such as the Junior Mayor Competition.

“With each new Junior Council that is formed, we try to raise the bar, hoping that each new group will rise to the occasion and become more firm and confident as they strengthen positive habits; and as a Council will work together to create great ideas and bring those ideas to fruition”, Mr Lee stated.

The competition which was implemented by the St. James Municipal Corporation as a feature celebrating the granting of City Status to Montego Bay in 1980, now falls under the purview of the Ministry of Local Government and Community Development.

The competition is designed to stimulate the interest of young people in governance, particularly at the local level, the competition also kick-starts activities to commemorate Local Government Month observed in November.

The first meeting of the St James Junior Council 2019-2020 cohort is slated for October 24, 2019 in the Council Chamber at the St James Municipal Corporation.