Mayor of Montego Bay and Chairman of the St. James Municipal Corporation, Councillor Homer Davis has made an impassioned plea for more to be done by security officials in countries such as the United States of America and Haiti to stem the flow of illegal weapons into Jamaica.

Speaking at a forum put on by the Caribbean Policy Research Institute, CAPRI at the Montego Bay Cultural Centre on Monday September 23, 2019 entitled “Scamming, Gangs and Violence in Montego Bay”, Mayor Davis said those countries are the main areas from which illegal weapons are shipped to Jamaica.

He said if the flow of illegal weapon to Jamaica is stopped, he is confident that the rate of gun murders in Jamaica will be significantly reduced. 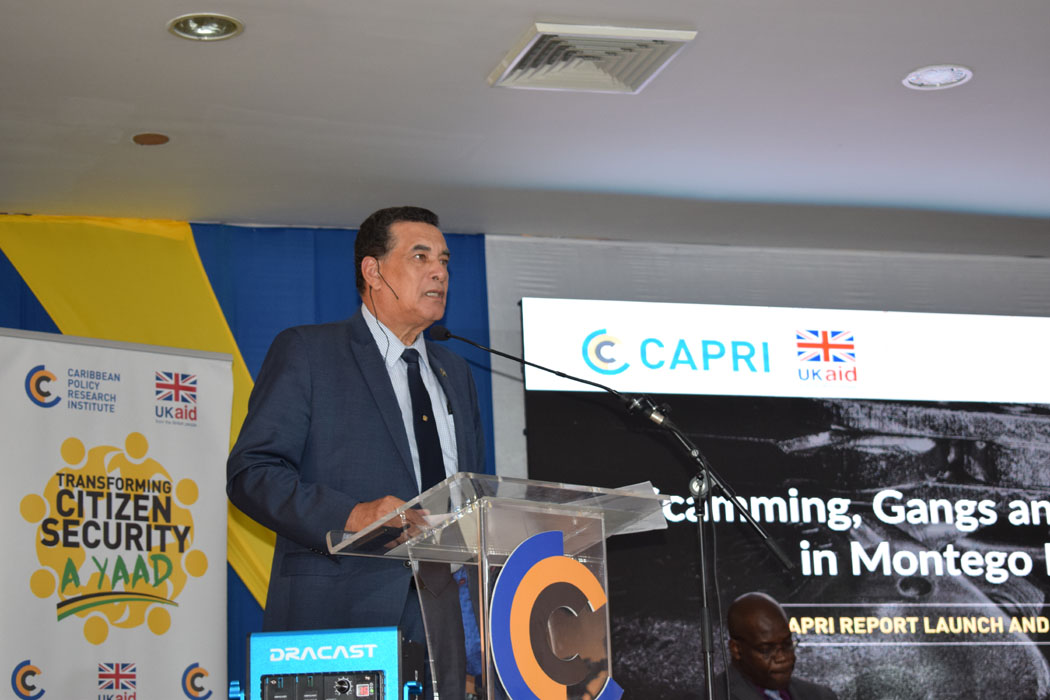 Mayor of Montego Bay, COuncillor Homer Davis addresses the assembleage at a forum organized by the Caribbean Policy Research Institute, CAPRI at the Montego Bay Cultural Centre on Monday September 23, 2019.

Mayor Davis said “if we can stop the flow of guns, we would not empower these gangsters or these scammers. There would not be anything for them (the scammers) to buy. We are not in agreement with Scamming…We know that people….pensioners have suffered immensely as a result of the action of these scammers. What we are saying to our partners is help us to Police our space, help us to restrict the flow of arms. We have over a thousand kilometers of shoreline…We are a thousand kilometers from the United States of America, we are less than 500 kilometers from Haiti and these are the points of departure for these weapons that come into Jamaica”.

Mayor Davis said back in the day when the ganja trade was rampant in Jamaica, there was a concerted effort by officials of Jamaica’s major trading partners to stamp it out and a similar push is required at this time to address the shipment of illegal guns into the island.

He pointed out that based on information from the Jamaica Constabulary Force, the gun remains the weapon of choice for criminals who continue to drive fear into the hearts of law abiding Jamaicans.

Mayor Davis said “when I look at the weapon of choice hat is used to commit these crimes it is usually the guns…99% of these weapons that are recovered in Jamaica is not made in Jamaica.  Am saying to our partners…we need more from you. We need to stop the flow of guns into Jamaica…Yes we are getting help from our partners but we would love to see more being done. As Mayor, I am making a special appeal to see how our partners can (further) assist us in reducing the flow of guns as the statistics from the Police will tell us that almost 75% of the murders in Jamaica is committed by the guns”.

On the issue of scamming, Mayor Davis said it is a case of “a good turning bad” as Call Centres which provide sustainable jobs for several thousand Jamaicans, gave birth to the practice.

“Today I ask the question-how did we gain that label (of being the capital of scamming)? It was never a part of our culture. Our citizens were exposed to the technological age in the early 2000 and as such a number of our young people were employed to the Call Centres here in Montego Bay and from that they were taught in some instances…by persons who thought they could be used as confidants”, Mayor Davis stated.

Meanwhile, Mayor Davis is expressing satisfaction with the development of Montego Bay, even in the face of the negative effects that scamming, murders and other anti-social activities have had on the city.

He said “even with the prevalence of murder, we have seen the economy of Montego Bay growing at a much faster rate than the national economy. Over the last 10 years, over 10,000 new housing solutions have come on stream. We have seen the development of Barnett Tech Park, the developments of the Fairview Commercial Centre, the Whitter Village shopping complex, the expansion of the BPO sector, over 8,000 new hotel rooms coming on stream and an additional 4,000 in the making. In other words, Montego Bay is very unique”.