By nature he is easy-going, much like a reflection of his upbringing in the laid back township of Lucea, Hanover. Bryce Grant is a hands-on person, who emulated his father’s affinity for building and fixing things. In the end, it comes as no surprise that he is drawn to the technical field.

Describing himself as a patriotic Hanovarian, Bryce a graduate of the College of Arts, Science and Technology, CAST, has been serving as the Superintendent of Roads and Works at the St. James Municipal Corporation since September 15, 2007, having started his sojourn in Local Government as Deputy Superintendent of Roads and Works at the Hanover Municipal Corporation from 1994 to the date of his transfer to St. James.

He said once he completed tertiary studies in Kingston, it was homeward bound, returning to the quiet but productive parish of his birth, Hanover.

Bryce Grant said “when I completed college, I told my friends in Kingston that I wanted to go back to country because my home never refuses me. As with a spate of luck, as I started my job hunt in 1994, I immediately gained employment as a Building Officer at the Hanover Parish Council (now Hanover Municipal Corporation) in the Works Department -a move which started my professional journey in Local Government service”. 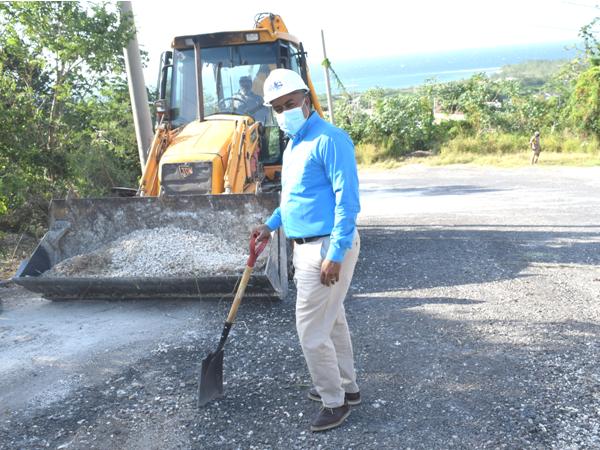 A MAN OF ACTION: Superintendent of Roads and Works at the St. James Municipal Corporation, Bryce Grant with shovel in hand is ready to "buss a sweat"-leading from the front.

With close to three decades of service in local government, Mr. Grant recounts that his journey to being Superintendent of Roads and Works is one that is filled with valuable lessons.

“When I started as the only Building Officer at the then Hanover Parish Council, learning on the job was a harsh reality. However, after just a little over two years of meticulous work, my efforts were rewarded with a promotion to the position of Acting Deputy Superintendent; a position I held until 2001”, a pleased Bryce Grant stated.

As someone who has never entertained the ideology of complacency, Superintendent Grant’s intrinsic desire to excel never waned even as changes in the workplace unfolded. In the year 2000 and against the backdrop of colleagues being appointed to permanent positions, Bryce became even more motivated to further his education and in 2001 he enrolled at the University of Technology for a Degree in Engineering which he successfully completed in 2003.

Now armed with a degree in Engineering, Bryce Grant was given greater and added responsibilities which resulted in him being transferred to St. James in 2007 as Acting Superintendent of Roads and Works. He noted that he was especially unyielding in his stance to make an impact which resulted in him receiving glowing evaluation from then Secretary Manager Christopher Powell after just 5 months in St. James. In 2009, Mr. Grant was transferred to the Trelawny Municipal Corporation as Acting Superintendent, serving for two years.

“The year 2011 marked a transformational period for me as I was conferred with the long awaited permanent appointment on my 15th year of service in local government. As Superintendent of Roads and Works at the St James Municipal Corporation I have 26 years of proud service under my belt. My job as head of the engineering arm of the Municipal Corporation touches all the major planks of the parish to include the development of parochial infrastructure, such as roads and bridges; public amenities such as public sanitary conveniences, abattoirs, markets and cemeteries; minor water supply operations; transportation centres, car parks and the Municipal building”, said the Rusea’s High School Past Student. 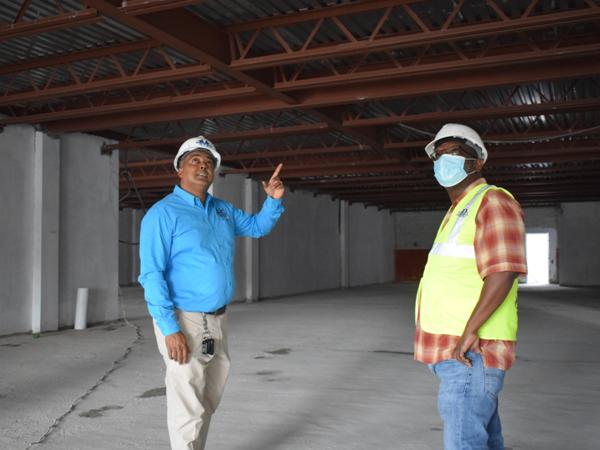 MAKING SURE  THE WORK IS DONE SATISFACTORILY: Superintendent of Roads and Works, Bryce Grant speaks with his Deputy, Pete Jackson as they inspect one of the many projects that the STJMC has implemented in the parish.

While serving as Superintendent of Roads and Works at the St. James Municipal Corporation, Bryce Grant has acted as Chief Executive Officer on a number of occasions.

When asked what makes his job interesting, Bryce relayed that he shares a friendly rapport with members of staff and always show respect to everyone. An ardent church member, he is serves on a number school boards and committees. He is also President of the Superintendent’s Committee.

Guided by the mantra “life’s persistent and most urgent question is: what is it you can do for others?”  Mr. Grant further expressed that “with this chosen career path, I am being allowed the awesome responsibility and honour of contributing to my country and the lives of my countrymen with a sense of pride.”